Charles R. Drew University was founded 53 years ago with a mandate to serve a community the size of San Diego. The community, South Los Angeles and Watts-Willowbrook, has had a continuous history of being the last in line for promised healthcare resources. 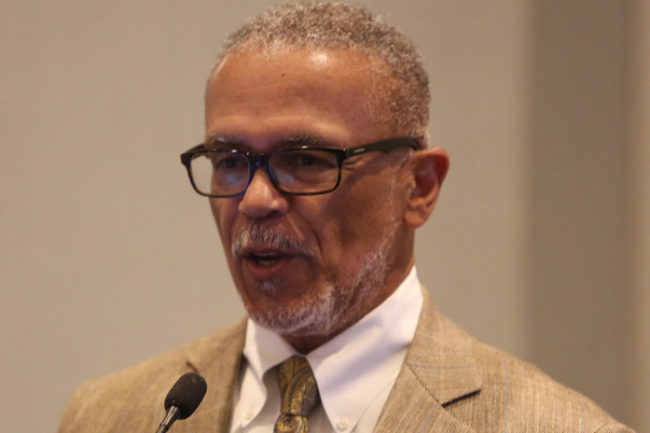 The practical reality is still evidenced in the plight of locals who experience scant relief because there are so many needs and not enough competent willing workers.

Full Disclosure: I have been around the King/Drew campus since 1974, when I wrote one of the first studies of an urban hospital as my doctoral dissertation in Anthropology, entitled “Innerface King/Drew.” I currently serve as a Development Consultant to the university’s dean of the College of Medicine.

Not enough people know that CDU has graduated thousands of distinguished graduates over the years. Yet, there is a need for far more skilled practitioners. Local residents experience a shortage of 12,000 qualified physicians in the SPA 6 service area. That is a chronic problem that affects the predominantly low-income clients because it hinders their access to top quality medical care.

CDU is a place where healthcare professionals with a wide variety of accomplishments impart knowledge to a dedicated core of students who dream of forging breakthrough pathways in their chosen fields. There are three colleges within the university structure: the College of Medicine, the College of Science and Health, and the College of Nursing.

Still, CDU has had many barriers to overcome to win public confidence and trust. The core concerns are both a perception problem as well as previous system malfunctions that caused rebuilding necessary operations and rightsizing at key times.

MLK closed to controversy in 2007. Charles Drew University didn’t shutter, but it had to close its residency programs and severely cut back on expenses. People wrote the former King-Drew Medical Center off as a pariah. 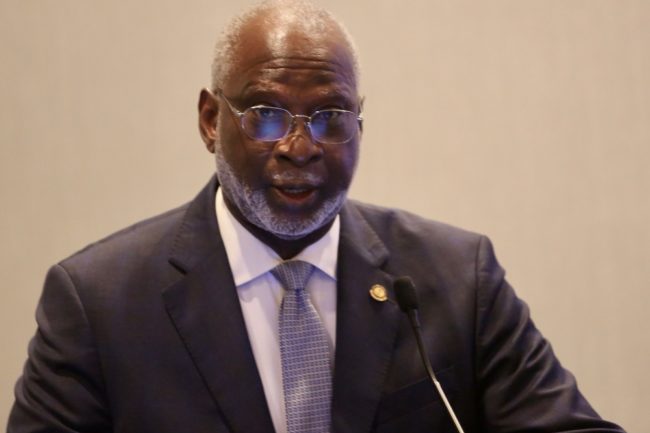 The university continued its robust research activities and its MD program with UCLA. And despite the difficult times, in 2010, the university started the Mervyn M. Dymally School of Nursing, by now its largest school. Today, because of the overwhelming need in the community, and the hard work of the current CDU leadership, it’s time to give Charles R. Drew University another look.
How has the fix been accomplished? Let’s start with CDU’s aggressive, recent efforts to burnish its image in the eyes of its core audience. As a celebration of the past seven years of near-unfettered prosperity and fulfillment of its core mission and cultural ties, the university’s recent Homecoming Weekend and State of the University address was a hallmark of how much positive mileage has been traveled.

Homecoming Weekend featured two days of events designed to attract, educate and entertain CDU’s core audiences that are part of CDU’s diverse mission. These events were divided into various areas of focus ranging on Friday from technical medical seminars, a luncheon keynote lecture by one of America’s most effective and beloved Black physicians, a gala banquet, and finally, straight-ahead jazz and rhythm and blues at Jazz At Drew on Saturday.

Three days later, CDU President David Carlisle, MD, gave his seventh annual State of the University address. His audience was an enthusiastic throng ranging from Los Angeles County Supervisor Mark Ridley-Thomas and the university’s Board of Trustees to CDU employees and local residents.

Highlighting the opening day of Homecoming Weekend was an HIV Update for Clinicians, a daylong symposium for healthcare professionals that included alumni and other local practitioners. At the mid-day luncheon, the inaugural Drs. Ludlow and Ruth Creary Distinguished Lecture offered an excellent presentation on the Black physician’s role in community leadership by David M. Satcher, MD, 16th U.S. Surgeon General and former dean of the CDU College of Medicine.

Dr. Satcher extolled the values of the health leadership-training program developed by his Satcher Health Leadership Institute, which is tied to the Atlanta-based Morehouse School of Medicine. He noted that President Obama elevated the value of mental health services through the Affordable Care Act.

The Rev. J. Edgar Boyd, pastor of First AME Church in Los Angeles, was in the audience to hear the keynote. “David Satcher is a historic figure, a great strategist at the national level as well as in the community,” noted Boyd. “He has wrestled with solutions for individuals and community needs for a long time.”

Longtime AIDS activist and CDU professor Wilbert Jordan, MD, noted that Dr. Satcher was his best friend. “We spoke earlier about the presentation and he’s right on target with these issues,” said Jordan. 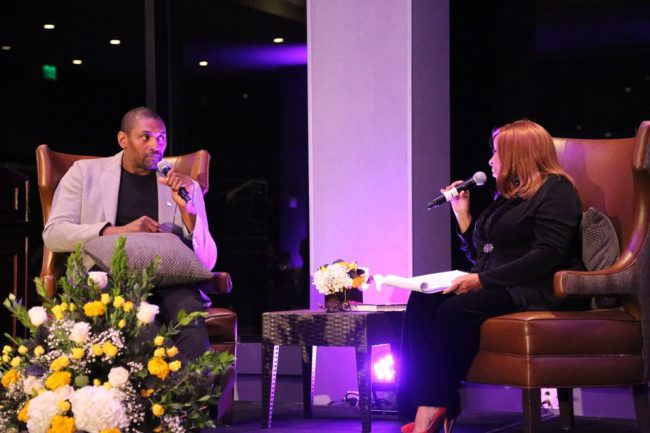 Friday evening was culminated by a homecoming banquet keynoted by former Laker Metta World Peace. He was an impressive speaker with refreshing candor and the courage to engage in a revealing Q&A session with journalist Tanya Hart. His recent book, “No Malice: My Life in Basketball,” was the focal point of the conversation.

World Peace discussed his chaotic early life, growing up in the Queensbridge district of New York City. He sold drugs by the age of 13 and became the father of three by the age of 23 – all while developing extraordinary skills that led to an 18-year NBA career.

He discussed his winning All-Defensive Player of the Year honors in 2004 and his 86-game suspension in the aftermath of the famous “Malice At The Palace” brawl between the Detroit Pistons and the Indiana Pacers.

World Peace provided a number of anecdotes, including an “inside basketball” story about meeting with his psychologist during the 2010 playoffs to relieve anxiety while prepping for the all-important Game 7, which the Lakers won by beating the Boston Celtics.

He linked his name change in 2011 to an attempt to gain control of himself. A core element of his message was to teach kids about parenting and other primary life skills as early as possible.

On Saturday morning, the College of Medicine Dean’s Advisory Council held its annual meeting. Various CDU officials and community leaders presented the DAC with a plan for an ambitious four-year medical school on the Drew campus that was endorsed.

Led by Dean Deborah Prothrow-Stith, MD, the project planning team offered a detailed overview of the project. DAC members were also asked to record a video excerpt to be used for promotion and marketing purposes. 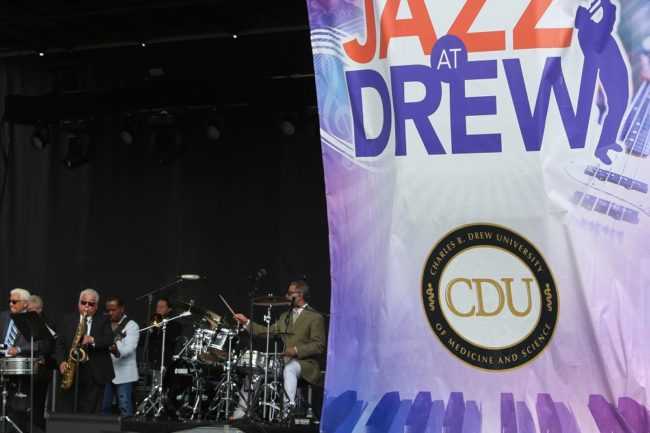 Saturday afternoon, Jazz at Drew demonstrated how the CDU message of healing an entire community could be delivered in the language of music and pop culture celebration. Since its launch in 1991, Jazz at Drew has sought to alleviate the need for residents in South Los Angeles and the surrounding area to travel far for quality entertainment at affordable prices.

Equipped with superior artist lineups and a unique concert experience, Jazz at Drew has demonstrated that local residents will support big-name entertainment when given the opportunity and venue to do so.

Jazz at Drew was a good opportunity to view the university’s vital connection to the community. CDU serves as an oasis of learning and community involvement in the oft-turbulent surroundings that is south Los Angeles. On any given day, professionals are moving around the campus going about their business teaching and learning within a stone’s throw of busy streets notorious for the dramatic events that fill newscasts and tabloids.

One of the most important aspects of the Homecoming Weekend celebration is that moment when the opportunity arrives to inform the university’s extended family about its numerous accomplishments. It is the opportunity for leadership to tell its story unfiltered by dissonance from the incessant monkey chatter that has sometimes overwhelmed rational discussion of CDU and its work.

That opportunity took the form of the State of the University Address by President Carlisle on the Tuesday following Jazz at Drew. As these types of addresses go, this presentation was brief.
Carlisle’s address was fact-filled, accomplishment-driven, and presented in a simple, down-to-earth delivery that proved most effective for a mixed audience of medical practitioners, community leaders and local residents.

Following an introduction by Board of Trustees Chair Marvin O’Quinn, President Carlisle presented his message in a clear, measured tone that supported the activities that he has undertaken during his tenure. In his introduction, Mr. O’Quinn stated that the Trustees were pleased with the university’s progress, both financially and in its core business model. He applauded the president for the leadership talent that he has assembled and noted that the future is bright.

Carlisle noted that this was his seventh State of the University message. He proclaimed the great achievements in the past year that the university has experienced in the areas of social justice and the core mission of providing quality healthcare in underserved communities.

Now, the university in entering a crucial year of its 2016-2020 strategic plan. He stated that CDU needs to grow higher and stronger. This is not a time to be stagnant or to slow growth. The boundaries of what is possible must be pushed higher.

Carlisle ticked off a list of accomplishments during his administration. The university now enrolls 700 students. There are more than a dozen degree programs. The university’s endowment now stands at $95 million.

To those people who might scoff at the size of the endowment in comparison to the multi-billion dollar endowments of the Harvards, USCs, and Notre Dames of this world, remember that each of those institutions have student bodies that are far in excess of 20,000. In a world of economies of scale, Drew’s growth is a hallmark achievement.

Carlisle also disclosed that during the summer, CDU was awarded full ten-year academic accreditation, the maximum available to institutions of higher learning; on par with Drew affiliate UCLA. Carlisle noted that such an accreditation is the norm for UCLA and Stanford, but is an extraordinary achievement given CDU’s history and client population.

Drew has also begun a new frontier in its mindset of administering health services. The university has branched out through a collaborative relationship with West Angeles Church of God in Christ, the largest church in Los Angeles.

As he closed, Carlisle wrapped a neat, appropriate bow on these encouraging developments. He compared the university’s journey to a trip up Mount Everest. Right now, after seven years of climbing, the university has reached basecamp. CDU’s basecamp is a way station, not the ultimate destination. It is important to continue moving to the next plateau until the university reaches the top.

In essence, David Carlisle is letting us know that he and his team have already visualized what life looks like at the top of this daunting mountain. CDU’s leaders certainly deserve credit as well as our continued support for getting this far.